When the National Foundation for Celiac Awareness approached us to create a video campaign for their re-branding launch as Beyond Celiac, we were thrilled to be part of such an important change.

The Beyond Celiac team had a great idea of showcasing why the re-branding was key through a bloopers video, showing that even their biggest supporters sometimes flubbed up their old name.

What's the name of the leading celiac patient advocacy group??

The video was a big success, with over 3k organic Facebook videos in the first two days! 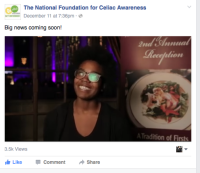 Beyond Celiac also wanted to explain the more serious side of why the change was needed with an “oval office speech” from their President, Alice Bast. You can check that video out HERE