May is national celiac disease awareness month, and Beyond Celiac came to us looking to create a short video that would highlight how people who have the disease might not look sick, but that they are living with a serious and chronic disease that needs constant attention and care. The video is part of their #60ForCeliac campaign. 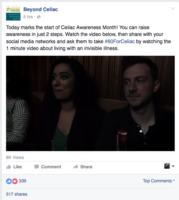 With over 8 thousand organic Facebook views and 500 shares in the first 5 hours it was posted, and almost 33 thousand total views during the month of May 2016, this campaign was a big success!